The Individual Mandate is Constitutional, Welcome to the People's Republic of America

On grounds that the penalty for not buying healthcare is not a tax, Chief Justice Roberts ruled that the Tax Anti-Injunction Statue, which says nobody can sue to stop the collection of a tax until it has been paid, did not apply. 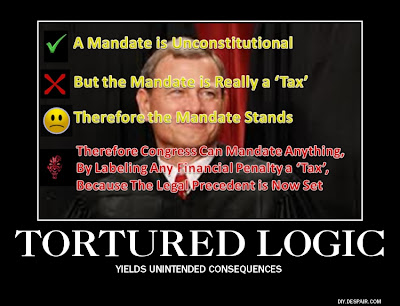 These are dangerous times! Welcome to the People's Republic of America! This is a land where the Federal Government can now mandate you spend your money, or you do whatever they want, as long as they have put in place a monetary penalty for not doing it. They can now mandate your behavior!


It is horrifying the amount of power the Federal Government has just received! Tomorrow, you could be "asked"  to buy an electric car, broccoli, solar panels, a house, contribute to anti-global warming funds or whatever politicians decide, or how about you will be "asked" to contribute 100% of your 401k to the "Happy Security & Safety Government Retirement Fund," or be "taxed" $500,000? If you don't do either, then you have an IRS problem. As long as they fine you for not doing it, they will be able to do do this legally, because the Supreme Court has just ruled that any tax by the Federal Government, enumerated or otherwise is a constitutional tax! We had to amend the constitution to make income tax constitutional because the constitution did not provide for it. How should this be any different? Justice Roberts had to twist and bend until the constitution broke to get this through! How is this even remotely like the country our founders envisioned?

We must stand strong with Mitt Romney in this upcoming presidential election, maintain the majority in the House and toss the Democrats out of the Senate! The door has been opened for unlimited and unbridled power of the Federal Government to mandate behavior. We need to shut it! If conservatives or at least Republicans do not hold all of the cards January of next year, there will be a slim chance that Obamacare can be reversed before it is implemented, at which point, it will never go away. The implications on how the supreme court managed to call this law constitutional today by using the taxation excuse, however, are chilling. Imagine what the Democrats will make us do, the next time they control the legislature and the presidency! We'll have to wait until the Supreme Court overturns it...FAT CHANCE.


Now that politicians can constitutionally control your behavior, we no longer live in a free country. It just takes a tax for politicians to make us do their bidding!

Posted by LibertarianPatriot at 10:30 AM