Yesterday, Slick Willy joined Obama at a fund raiser and formerly endorsed him. He said Romney “would be in my opinion calamitous for our country and the world.” 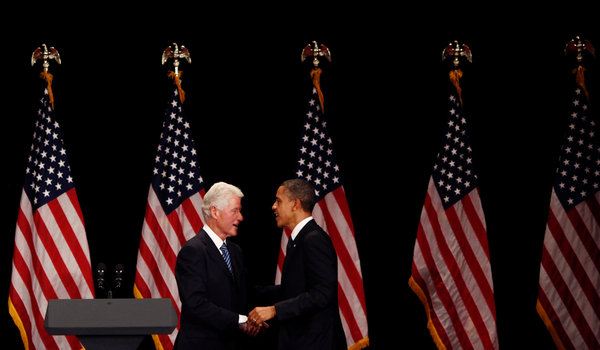 You know what this means? It's walk back time!  Remember a few days ago when Clinton was defending Romney, saying he had a "sterling business career?"  You see, things are not what they seem. If you know the history between Obama and Clinton, you know that Bill Clinton does not like Barack Obama. Because of Bill's remarks, in the spirit of party unity, he has to come out and endorse Obama. Let's see what Dick Morris, former Clinton campaign strategist has to say:

Dick Morris says Bill Clinton does not want Obama to win. He quotes Clinton as saying to conservatives: "You have six months to save the country." I don't buy into the Politico article today saying "the once-raw wounds that were publicly clear have healed." Anyone would have to be a fool to believe that after Clinton defended Romney last week.


While he was out in 2008 campaigning for Hillary, Bill Clinton said Obama "has the instincts of a Chicago Thug." He was sore over the vote-rigging he claims he personally wtinessed in Nevada involving the Culinary Workers Union, and said Obama played the race card on him.

The moral of the story? Publicly, Democrats will band together because they are Democrats first, even if they hate each others guts. If someone goes off track, they must jump back in line to defend the party. It's no surprise that they are once again lying to the face of the American people. What happens behind close doors is another matter.


Clinton on the vote-rigging he witnessed in Nevada
Obama on the lawsuit in Nevada
ABC News: Bill Clinton: Obama Played Race Card on Me
Politico: Clinton Supports Obama at New York Fund-Raisers
Posted by LibertarianPatriot at 4:39 PM