Posted by LibertarianPatriot at 7:46 PM 0 comments


Jay Carney: ‘If One Child’s Life Can Be Saved, We Must Take Action’

Let's put that statement in context...


So if by saying "one child's life" he means do the same thing that has caused millions of men, women and children to die, then I'd say he's on the right track.
Posted by LibertarianPatriot at 7:58 PM 0 comments

Democrats Like Americans the way Mass Murderers do - defenseless.

For people who have no idea what is going on, this video shows how these criminals in Washington have been dodging questions about their selling of guns to violent drug cartels. Guns which they now want banned for law abiding citizens.

Somehow, Eric Holder is not sitting in a jail cell. You know, Eric Holder, our Great Attorney General, appointed by Dear Leader, who was overseeing Operation Fast and Furious. This "Operation" told gun shop owners to sell guns to Mexican drug cartels while the Feds allowed the guns across the border without any tracking or monitoring.

But what did Obama do when an American border agent, Brian Terry, was murdered? Was he outraged? Did he go after the drug cartels? What did Obama do when Holder was asked questioned about this act of war toward Mexico? Obama invoked executive privilege to protect Holder from all of these inconvenient pesky questions. That way nobody can prove that he orchestrated this in order to have an excuse to ban guns in America.

Now i'm reading stories about Obama wanting to use an executive order illegally, to ban "assault weapons," and Diane Feinstein's bill covering shotguns and pistols? Coincidence? These Democrats have no shame in what they do.


If you are a Mexican drug lord who kills American border agents, Obama will help you purchase these "assault weapons" and protect those responsible for providing them to you, but if you are a law-abiding American citizen he wants to send agents into your home to seize them.

Obama has shown time and time again, he is willing to break the law in order to accomplish his agenda. From disregarding the law by giving union pensions priority over secured creditors during the Chrysler bankruptcy, to allowing illegal immigrants to stay in the US as long as they go to school and are under 30, to ignoring a court order to stop the drilling moratorium after the BP oil spill. This man, who swore an oath to defend and protect the constitution only enforces laws that he sees fit, and creates new ones unilaterally at will.

Diane Feinstein shows that Democrats have no respect for the constitution or the 2nd amendment. As a Democrat political hack, she is trying to use the school shooting tragedy as a springboard to ban as many guns as she can. She has proposed a gun ban that is not just limited to what they call "assault weapons," but includes pistols and shotguns. Despite the fact that mass murders happen in "gun free zones", she has decided to try and make the whole country a "gun free zone." As a Democratic hack, of course she is also a hypocrite-she is a concealed carry permit holder.

So for you gun control nuts out there, why do you support these elitist politicians who have bodyguards armed with actual machine guns while they help criminals? Is it because you are good at sticking your fingers in your ears while screaming idiocy, drowning out the voice of reason, so that you can feel good about yourself while you cause more innocent people to die? Do you aspire to be a blithering idiot like Piers Morgan?

Do you like to help rapists, murderers and thugs? I don't believe that.

I do believe rank and file liberals are overgrown crybabies, who because of their fragile emotional states, have great difficulty separating how they feel from actual facts and logic, due to constant psychotic mood swings. These people are easily controlled by their leaders, who need only repeat certain phrases a couple times, point a finger at someone else, and pretend they are angry at some injustice, all the while creating more problems to "fix" the problems they created.

If they succeed in banning guns, it will directly cause more people their deaths. Democrats like Americans the way mass murderers do - defenseless.

Posted by LibertarianPatriot at 9:03 PM 1 comments

This is a Shocking Video...

Nothing new, Obama is at it again, accusing others of doing exactly what he wants to do as we see liberals do all the time. What is shocking is who the one reporting this is. Rachel Maddow of all people? Really? What? I never thought I would agree with this lady, but she has done an unbelievable job in this segment!
Posted by LibertarianPatriot at 5:07 PM 1 comments

Posted by LibertarianPatriot at 4:37 PM 2 comments


The NRA did an excellent job today of responding to the idiot liberals and representing the situation accurately. I am glad they did not bend to the whims of liberal opinion. If I didn't know any better, I would have thought he stole material from my post yesterday. : )

Look at the childish liberal code pink occupiers, with their signs colored with crayons, who refuse to listen to logic. They are perfectly happy disarming people who could have stopped the shooting from happening. The "assault weapons" these idiots want to ban function the same as any semi auto rifle. One shot per trigger pull.

But what can we expect from liberals except to be abjectly ignorant, and give stupid opinions based on no facts, like children making a scene because they want candy. We should all be glad they didn't show up in vagina costumes like they have in the past. It would be too bad if the janitor had to mop sand off the floor.
Posted by LibertarianPatriot at 3:48 PM 5 comments

Of course whenever a psycho shoots people with guns, the first thing Democrats want to do is find ways to take away your protection by taking away your guns.

After the shooting in Connecticut, Obama, the man who brought us Operation Fast and Furious, which killed a federal agent, and sold guns to Mexican drug cartels, wants another assault weapons ban, like the Clinton ban in 1994. In his speech he talks about all of the gun violence that has killed innocent people, but doesn't talk about any lives that were saved in self defense. Listen to this man try and sound reasonable:

The Clinton ban banned weapons with features such as a "barrel shroud," pistol grip, retractable stock. Something that looks like this:

But this was perfectly okay: 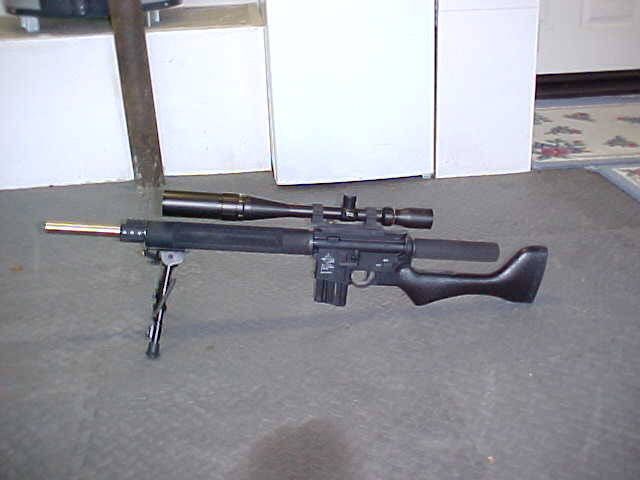 If you didn't already know, IT'S THE SAME GUN WITH THE SAME OPERATING PARTS BUT DIFFERENT FURNITURE! Both are only semi automatic (one shot per trigger pull) and use the same bullets. But somehow the first one is an "assault weapon" but the other is not. One is supposedly making psychos go out and kill people, but apparently, if they didn't have those features on the gun, those psychos would just behave.

The proof that this gun grabbing Marxist is lying through his teeth, and he knows assault rifles are good for personal protection, is the arsenal the secret service uses to protect him. I don't know about you, but I don't have a security entourage going hours ahead of time to every place I visit ensuring that it is safe. Not to mention his security detail is equipped with fully automatic assault rifles (multiple shots per trigger pull) even when he is cruising around, not in a hostile country, but in Washington DC: 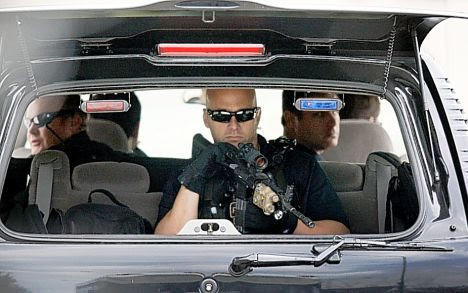 Why is it that the president, who is supposed to be our public servant, has guns protecting him that are actual fully automatic military rifles, while for our protection, he wants to prevent us from owning single shot semi auto rifles that look like the ones that protect him? Absolute Hypocrisy!

The Declaration of Independence says:

“... when a long train of abuses and usurpations, pursuing invariably the same Object evinces a design to reduce them under absolute Despotism, it is their right, it is their duty, to throw off such Government, and to provide new Guards for their future security.”

By the time we get around to it, we are supposed to do all that with bows and arrows, while government agents are equipped with tanks, jets, and the latest and greatest weaponry funded by you and your future generation's tax dollars. What is going on in this country? Are we living in pre-WWII Germany? 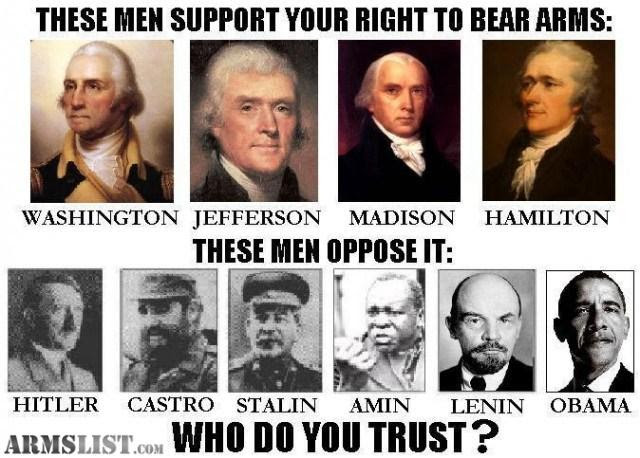 Liberals refuse to see logic. The case of gun control is no exception. Even though piles upon piles of evidence and past precedence suggests gun bans only increase crime rates, and make it less safe, they pigheadedly believe that gun bans are a good idea. Check out this video on what happens after guns were banned in Australia:


Meanwhile, while all this is happening, what is the NRA doing? Cowering like little girls, taking down their facebook page, and giveaway promotions. They will be making a speech tomorrow. If they give way, and fail to stand up for our 2nd amendment rights, on the pretense that guns are only for sporting and hunting animals, as I have heard them state time and time again, then you will know, they are only a spineless organization as useless as a RINO Republican.

The Marxist wants to use this terrible tragedy as a political stepping stone, as a means to ban "assault weapons." He is also talking about taxing ammo at ridiculous rates. Criminals don't follow gun laws! If anything, there will be more deaths if Dear Leader succeeds. Make no mistake, the next few months will be crucial, call your congressman and senators and tell them to oppose any gun bans that will be at best ineffective, and at worse, increase the crime rate! The gun grabbers are coming!!


Posted by LibertarianPatriot at 5:50 PM 1 comments