The following video is a Democrat video trying to show what those "Evil Republicans" have done to an old lady by requiring an ID to vote in Tennessee. It shows how much Republicans hate little old ladies.


Le'ts go over a couple of the lies and misrepresentations that make the video fall apart completely:

At 0:59 Bob Bauer, OFA General Counsel member and Obama administration attorney says "Around the country under Republican leadership, various laws have been passed, all of them having the fundamental objective of impeding the right to vote."


You heard it! Bob Bauer is saying that Republicans want to prevent people from voting! Last time I checked, Republicans in office are there because they were elected by voters...who actually voted. (What an epiphany of gigantic proportions.) Judging by last November's midterm elections, they did a pretty good job of it.

How asinine is this for the Obama administration to even try and attack Republicans for preventing US citizens from voting? You see, to Democrats, US Citizens are the same as illegal aliens because illegals need "equal rights." Therefore, if Republicans don't want illegals voting, then they don't want US citizens voting. In a perfectly sane world, Democrats would be laughed into exile. Mr. Bauer, if you still haven't figured it out, let me give you a small hint so that you might be able to guess just why Republicans might want IDs to be verified: VOTER FRAUD

Look Mr. Bob Bauer, what is "CORROSIVE" and eats away at people's sense (2:37), is your belief that the American people are so ignorant or stupid, that you can lie arrogantly through your teeth, to successfully protect the reelection chances of the biggest failure of an administration since Jimmy Carter.


At 1:26 Charlene Kilpatrick says "The law is that you would need an original birth certificate, voter registration card, and 2 pieces of ID in order to be able to vote." Then, at 1:41 Charlene Kilpatrick talks to an empty space as if it were denying Dorothy Cooper the right to vote because she did not have her marriage certificate.

Gee, this will be such a tricky one to prove wrong. Even a liberal should not find it that difficult to go to the Tennessee SOS website and read what the voting requirements are. Maybe the key word here is "read." It says, "all voters must present an ID..." I'm sorry, does the word "an" signify 4 pieces of identification, or just 1? Gee, I'm not sure. Wow, this difficult to find website also tells what IDs are acceptable! If only Obama knew... 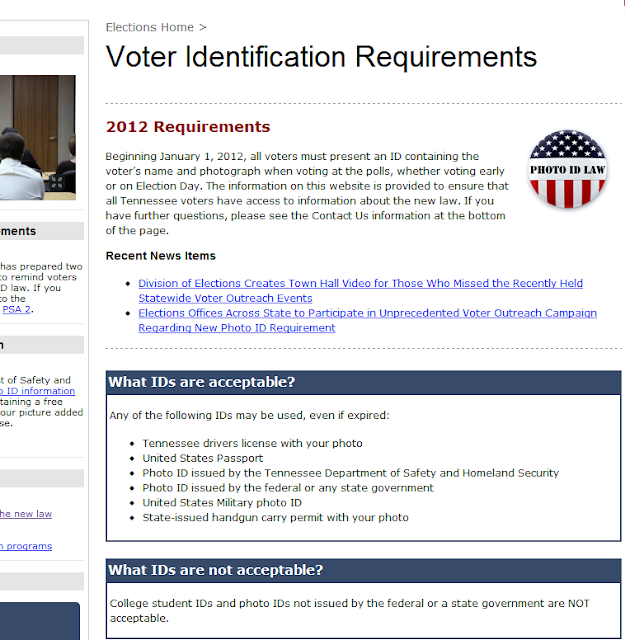 Just by briefly looking over the "Voter Empowerment" bill, it looks like they want the U.S. Federal Government to keep up-to-date records on law-abiding citizens, lower the voting age to 16, and have same day registration and voting. Rest assured, the Democrats will surely do away with voter fraud with this new law, which makes it impossible to verify the suddenly abundant number of 16 year olds registering to vote on the same day as the election.

Another funny thing I noticed is under Sec 1303 of this bill. It allows voters who believe they have been subject to voter intimidation to report it to the Attorney General. After all, Attorney General Eric Holder is the poster child of fair and equal treatment in cases of voter intimidation. If black people are intimidated by whites at the voting booth, that's a crime but if Black Panthers stand outside of polling places with night sticks and threaten white voters, that's not a crime.

The Democrats lie to the American people to promote policies that allow criminals to get away with committing voter fraud, and coincidentally they will take any and all votes they can get. Democrat politicians and criminals, peas in a pod.

So what else are we getting in this new law? Well, maybe we'll just have to "pass it to find out what is in it."